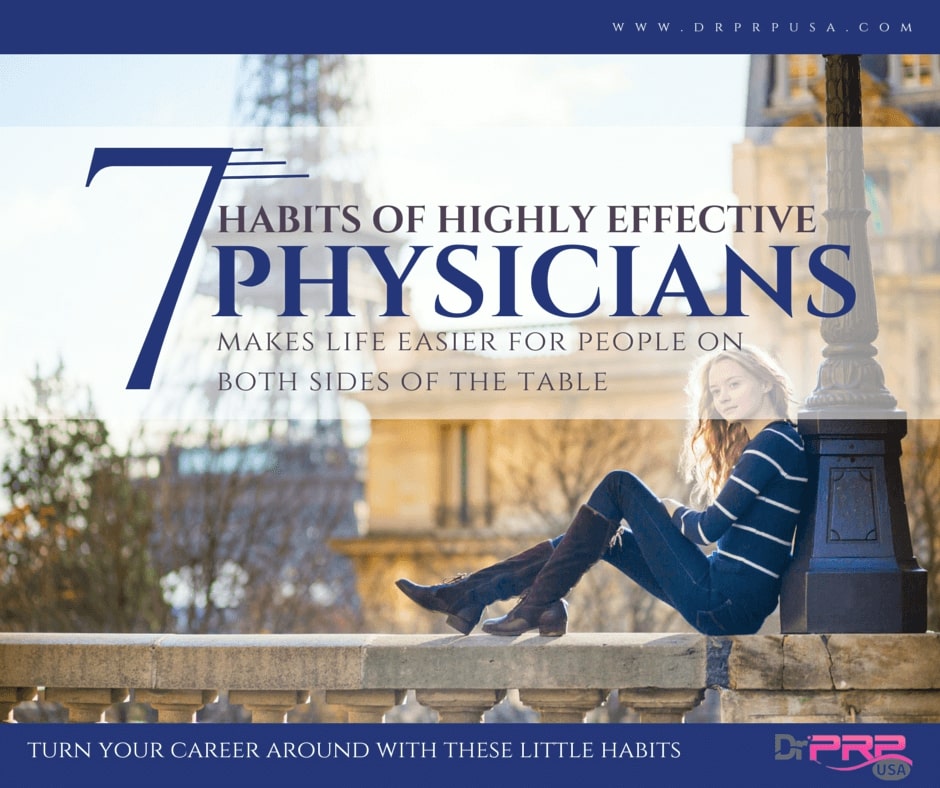 Physicians literally do life-saving work. Quite often, they are described by many as everyday heroes. Averting health disasters and bringing back good health. But as Benjamin Parker aka “Uncle Ben” says, “with great power comes great responsibility.”

So trouble brews when these physicians are blinded by their powers and forgets their responsibilities. Typically happens when they are over-worked, bored or burned out.

If you’re a physician reading this, here are a reminder of 7 of your responsibilities. Otherwise known as habits of highly effective physicians. If you’re the one on the other side of the table, aka the buyer/patient, then look for these traits in a doctor in addition to their board-certification.

It all starts with looking at the patient in the eye. A smile helps. So is asking the patient to take a seat as soon as they enter the consultation room. Then ask questions. Lots of questions. Questions open up clients. It’s easy to jump into a conclusion the moment they start describing something. Doctors do that all the time. Have a little patience. And take time to listen. Perhaps, it was how they were trained. Report shows doctors-in-training are spending less and less time with patients and more time in-front of their Macs.

Being sensitive also means knowing the overall life and health goals of the patient rather than just the current situation he or she is in. And being sensitive means, having compassion. If they’re worried, don’t shrug it away. Share their pain. Then ask totally unrelated questions. It’s fun. Don’t spend too much time on it though. Once you’re done, then lean in with your next successful habit.

This can be a tough one. More often than not, patients are wrong. They have no idea what’s going on. Nevertheless, their requests and thoughts are vital clues. Take it seriously and you’ll see a big picture. Of a person with a unique set of struggles, challenges, and mindset. It can be a challenge to work with their uniqueness. It doesn’t happen on the first visit.

For example, if they say “this are exactly what happened when I had another crisis before,” take it seriously. Or if they say, I just don’t feel right, chances are something’s wrong. Investigate it. Could be an infection, a psychological issue or an impending catastrophe. When they say “I took this medicine and that’s why this happened,” believe them. There are so many side effects for these pills that you might be surprised to see many of them are actually true.

Don’t be in a hurry to scribble on your prescription pad and sent them away. Tell the exactly what to do, what to look out for. And while you write prescriptions, explain them. Translate it into patient terms. If drugs are prescribed, tell them the side effects and the reason to take that risk in addition to explaining what it’s for.

In other words, treat them not as if they’re receiving a favor but rather the mindset to carry is “client relationship.” Nowadays with Google and WebMD and countless medical apps, some patients are fairly educated, sometimes more than the doctor on certain health-topics. So they need a thorough explanation that just mere prescriptions.

Habit 4: Encourage them to get a second opinion.

Let’s make this clear: most patients get second or third opinions. They may go to see their friend’s doctor or at least ask an MD in Real Self or other online portals for feedback on your diagnosis. You can’t help it. So what does the good doctor do? Present them the diagnosis. And encourage them to get second or third opinion. Don’t be ashamed when they come back to say so and so, a famous doctor, who’s running an advice column in this site, says your diagnosis is wrong.

Instead, admit your mistakes. We all make mistakes. There’s nothing wrong in it. Guarding against patients pointing out mistakes is foolish. Because these are valuable opportunities for learning. So go out of the norm and insist on patients doing their research online (or offline with other doctors). When they come back with their findings, there’s something new to learn. Free education.

Don’t answer calls that are not an emergency. Don’t hide behind shiny Macs and type on the keyboard non-stop. Celebrate the patient. They’ve probably took an entire day off to do this thing. Give them cheers. Respect their time. Waiting for 10-minutes to half an hour is okay. Not 1 hour or more. I know this is hard to pull off. Nurses, receptionists, other doctors, patients are all vying competing for attention.

One way to do this is be very organized and process oriented. Let everything happen in a step-by-step manner. Assembly line. When checking reports, check all reports. When seeing patients, just do that and nothing else. And everything should have their own place in the assembly line. Only then will it all work like a melodious orchestra.

Habit 6: Be open to all alternatives

Again, the patients have access to the greatest doctor ever to live on this earth. It’s called Google. And so they might know and even trust many alternative treatments that’s not always the norm. Be open to it. Just because you’re surgeon, don’t prescribe surgery. Consider alternatives like physical therapy. For joints, go for a combination of Platelet-Rich Plasma and physical therapy as early as possible. This will put off the highly invasive replacement surgeries in future.

And on the other side of the table, if there are known alternate treatments let them know. Let them go with the ones they’re most comfortable with. Refer colleagues. More choices isn’t always good. But it increases trust and confidence when patients know there are multiple options.

Habit 7: Finally, make them feel confident. Have an action plan.

Sharing responsibility is one way to grow responsibilities. Don’t mandate a barrage of tests. Ask patient’s choice. This make them confident. According to studies by the Institute of Medicine, over $200 billion dollars are wasted annually for unnecessary tests. Patients probably know which ones they want. Even if that’s an unnecessary test, go with it if the patients wants. Sometimes, their gut feeling is right.

The other thing to do to make them feel confident is to have an Action Plan. Even though, patients are making the choice, ultimately the entire process should follow a set action plan. Explain to patients, if you choose this, then we can do that and then this will be the outcome, if negative we can do this, if positive we can do that and so on. No matter what show unwavering confidence in paving the best road to maximum healing possible.

So that’s it. The 7 habits of successful physicians. At the end of the day, there’s no such thing as a perfect physician. No one gets all of it right. Not even the highly successful ones. But near-perfection, that’s a totally different ball-game. And with a little planning and thought, it’s easily achievable.

The result: a better experience for people on both sides of the table.