Why Doctors Are Now Ditching Steroid Injections For PRP 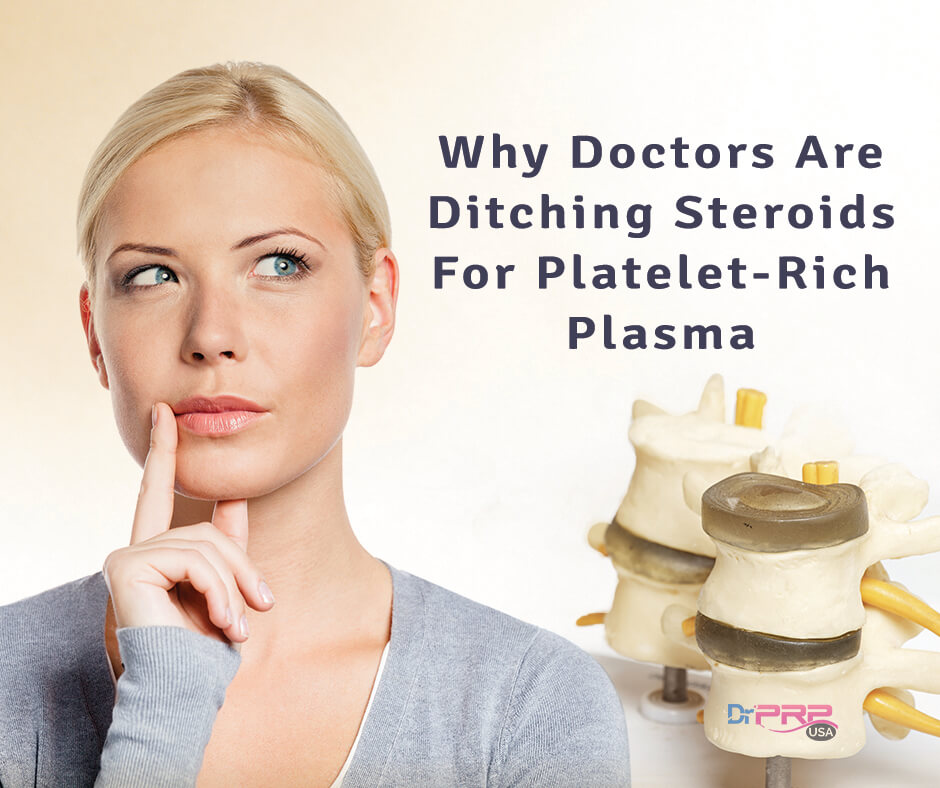 The use of immunosuppressive biologics, non-steroidal drugs (NSAIDs) and corticosteroids, collectively known as Anti-Inflammatory Therapeutics (AIT), has been rebuked by many, including well-known MDs. But there are, still, a good majority of family doctors, pain-management specialists, and orthopedic surgeons who routinely prescribe them for arthritis, tendonitis, and bursitis because apparently, there’s no other better alternative. This is evident in the ballooning anti-inflammatory therapeutics market which is projected to reach a valuation of $100 Billion by 2020. But according to researchers, there already exists a better alternative and that is Platelet-Rich Plasma and scores of physicians are now prescribing it as a first line treatment instead of AITs. 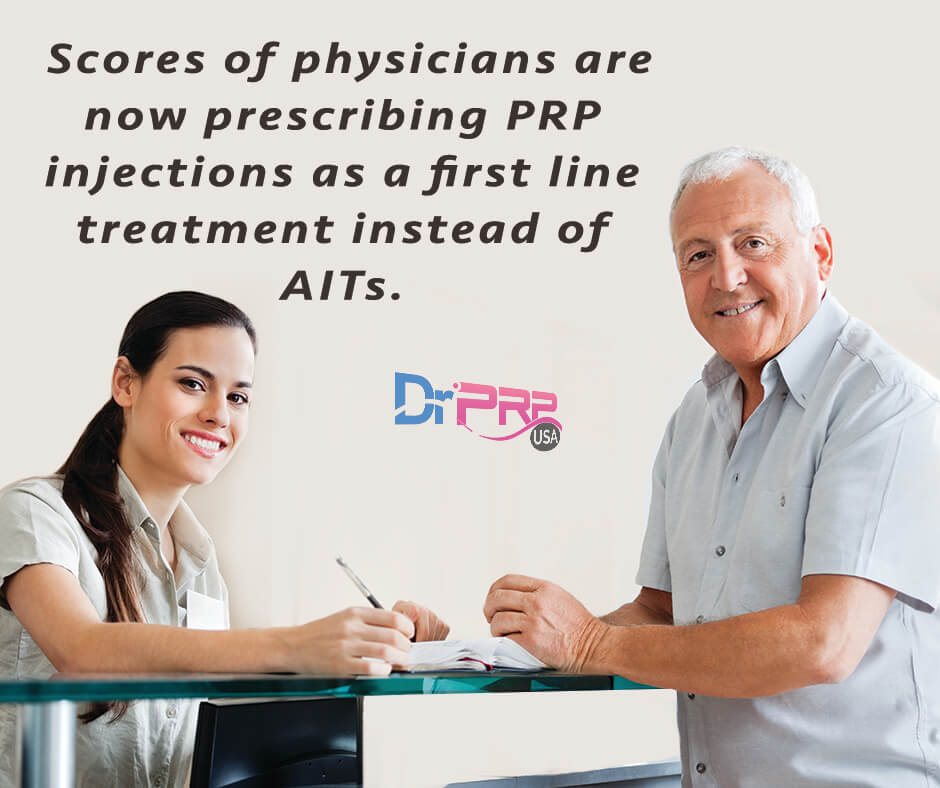 One of the reasons why AITs are popular is the belief that most musculoskeletal diseases are due to inflammation. It is believed that inflammation is the cause of injuries and pain. But over the years, numerous studies have shown, rather persuasively, that inflammation is a signaling process used by the body to recruit growth factors and cytokines to the tissue microenvironment. While suppressing the inflammation with drugs interrupts this natural process and provides short term relief to the symptoms, in the long run, it prevents structural healing. 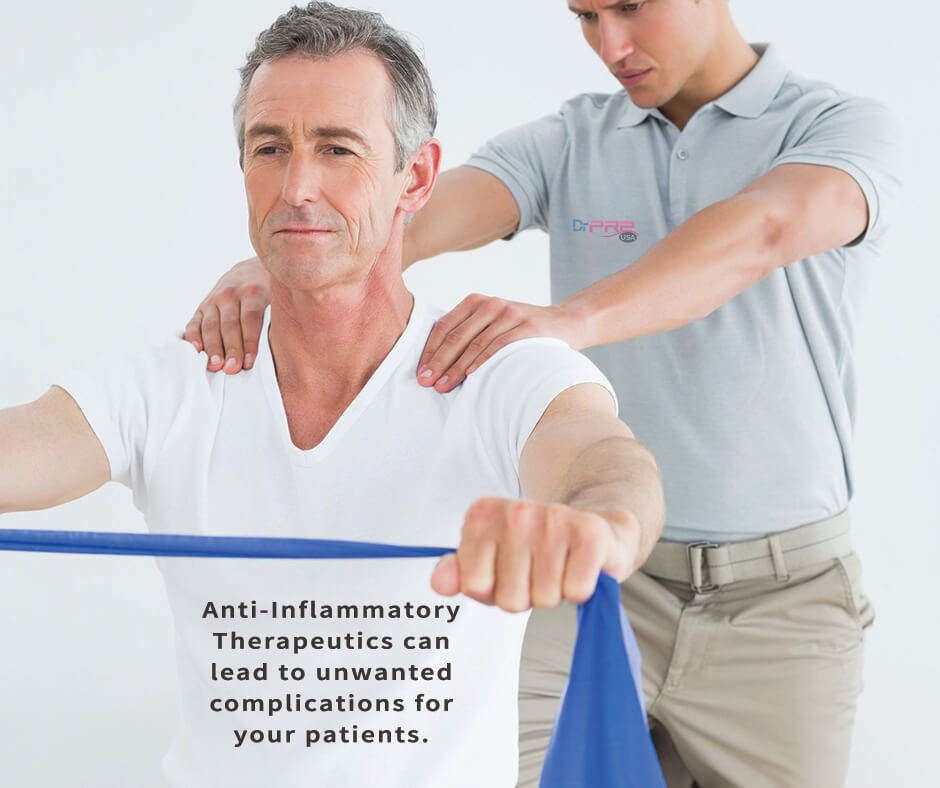 But the argument among pro-AIT physicians is that they provide the best short term relief. They claim that a short or two of AITs keeps the situation under control and is not a big deal in the larger scheme of things.

Not true. They have pain-relieving properties but not as dramatic as we may think.

First, corticosteroids are not as the ultimate pain-killers and there are other methods far superior.

Second, neither can NSAIDs be considered the most effective pain-killers and that’s a fact.

Third, the immunosuppressive biologics like DMARDS, cytokine-blockers and TNF-blockers are not effective pain-killers anyway.

But they all have one thing in common. And that is, a long-list of side effects.

The Debilitating Effects of AITs

It would have been acceptable if we could just temporarily harness the whatever little pain-relief that AITs offered while we’re looking for a favorable course of action. But that isn’t the case. Studies show that even a single dose of these AITs can lead to unwanted complications. Let’s take a deeper look.

Steroids are evidently the most destructive ones. Physicians know that they must prescribe steroids very cautiously. But the problem is once they work, patients may prefer them again and again. Especially athletes who just want to get back in the arena for that final game. After all, who wants to sit on the sidelines when life passes by? Just one more time, they’ll say.

But the long term effects are disastrous. Not only are they hard to get off of, the steroids have the ability to kill mesenchymal stem cells, lead to cartilage loss, and are one of the most common causes of secondary osteoporosis. Scores of athletes and weekend warriors have used steroids to temporarily push away pain only to end up in the surgery table a few years later.

NSAIDs are a totally different beast. Medscape reports that more than 70 million of them are prescribed to patients each year in the United States alone. This is in spite of the warning issued by the Arthritis, Rheumatism, and Aging Medical Information System (ARAMIS) against NSAID use.

To the patient, it sounds like a decent proposal – use non-steroidal drug to temporarily alleviate pain. However, the consequences are enormous. In this comprehensively researched article on the Journal of Prolotherapy, the writer calls for a total ban on the use of NSAIDs for joints owing to its potential for degenerating cartilage. This is alarming considering that majority of the NSAIDs are prescribed for joint conditions like arthritis. In another study, use of NSAIDs was shown to have tripled the progression of Knee Osteoarthritis.

Furthermore, even in the 1980s researchers have found that NSAIDs can disrupt intestinal integrity.

Anti-inflammatory biologics include drugs that block pro-inflammatory cytokines like tumor necrosis factor alpha (TNF) and interlukin-6 (IL-6) as well as conventional disease-modifying antirheumatic drugs (DMARDs). The problem with these drugs is that they suppress the biologic entities responsible for the natural immunity of the body. Applying them to a joint for example, doesn’t limit its effect to that area. Instead, it suppresses these biologic entities THROUGHOUT the body including liver, colon, small intestine, bones, skin and even neurons.

That’s why they have been linked to neurological diseases, and other diseases.

Blocking pro-inflammatory cytokines are definitely a bad idea. For example, the cytokine IL-6, one of the main cytokines targeted by the new generation of Arthritis drugs is a major component of the central nervous system. So is anti-TNF drugs. Blocking these can only lead to adverse events in the long term elsewhere in the body. 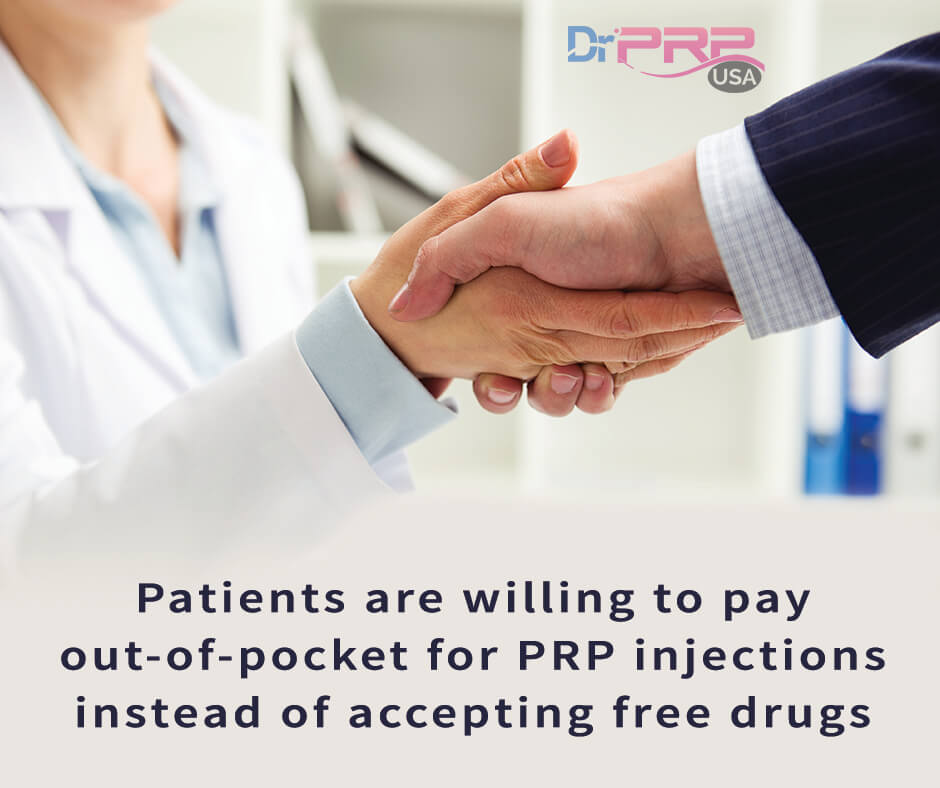 Although not immediately evident, the trend for these Anti-inflammatory Therapeutics are actually going down. As researchers discover more serious side effects, the market will start shifting to more natural solutions like Platelet-Rich Plasma. In fact, it’s already happening as we speak. Even without the support of insurance companies (read more about insurance coverage for prp injections), more and more people are opting for PRP instead of AITs. That means people are willing to pay out-of-pocket for PRP instead of accepting free drugs. In other words, the downward trend for AITs has begun.

Patients and physicians are learning the hard way that SUPPRESSION OF INFLAMMATION DOES NOT EQUAL TO HEALING. 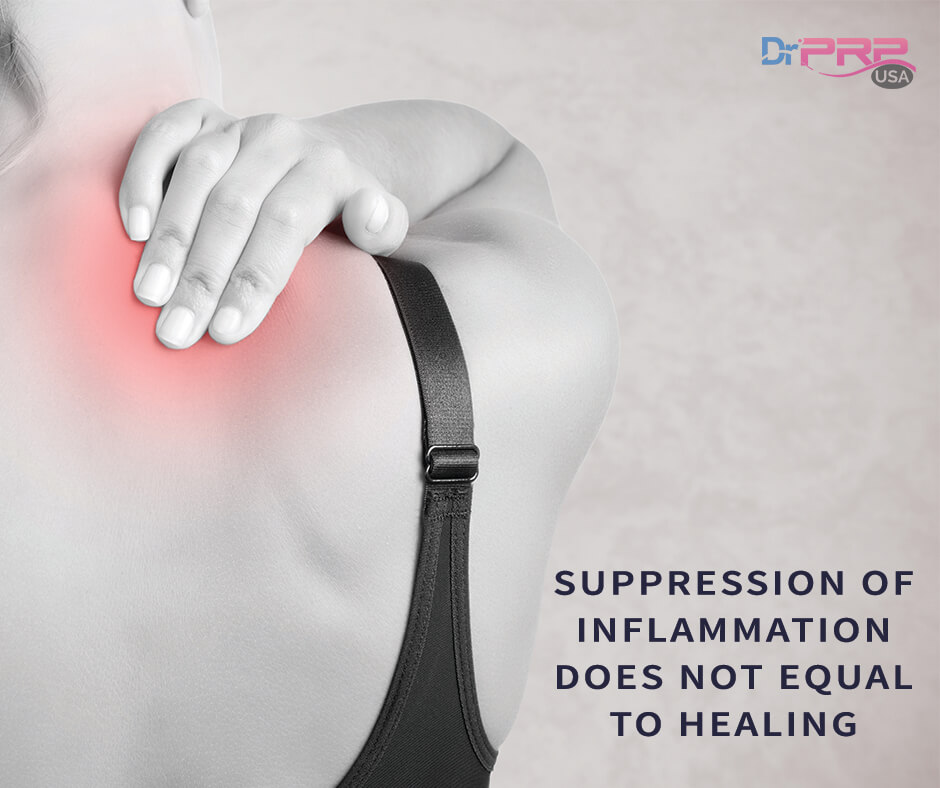 On the other hand, the trend for Platelet-Rich Plasma is climbing organically.

Here’s Allen Mishra’s tweet about PRP’s Google trends. Alan is the founder of the Biologic Orthopedic Society that has over 6,500 members in Linkedin.

Independent research is also catching up with Platelet-Rich Plasma. It has proved so far that PRP is far superior for:

The study shows that sacroiliac joint (SIJ) injection of Platelet-Rich Plasma has a longer-lasting effect on pain than steroids. And the difference is HUGE. While efficacy of steroids was only 25% at 3 months, it was 90% for PRP.

In this study, the steroids were only able to suppress symptoms for recalcitrant lateral epicondylitis, while PRP was able to biologically heal the lesion. Furthermore, the steroids caused further tendon degeneration. Another study proved that patients who had PRP shows better pain and functional improvements than patients who had corticosteroid injection. 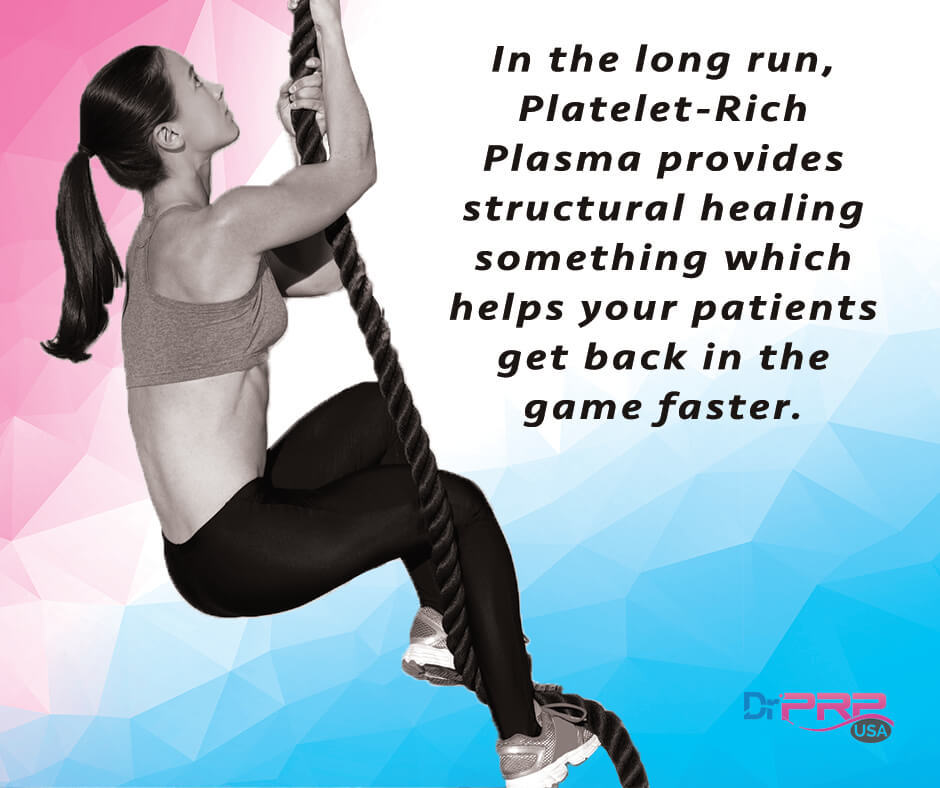 This study proved that Platelet-Rich Plasma injections show benefit earlier than cortisone injections for rotator cuff tears. Another similar study also found that a single dose of PRP is better than steroid for Shoulder impingement syndrome.

Why PRP Is Actually Good For Both Patient And Physician

As you can see, the reason why more and more physicians and patients favor Platelet-Rich Plasma over Anti-inflammatory Therapeutics is that PRP not only eliminates the symptoms (pain and function) but it actually heals biologically. Yes, of course, the manufacturers of the conventional drugs would love you to believe that their billion-dollar-research-backed miracle drug is VASTLY superior to the autologous Platelet-Rich Plasma that can be produced within 10-20 minutes in a small clinic. But what we’ve seen is quite the opposite. 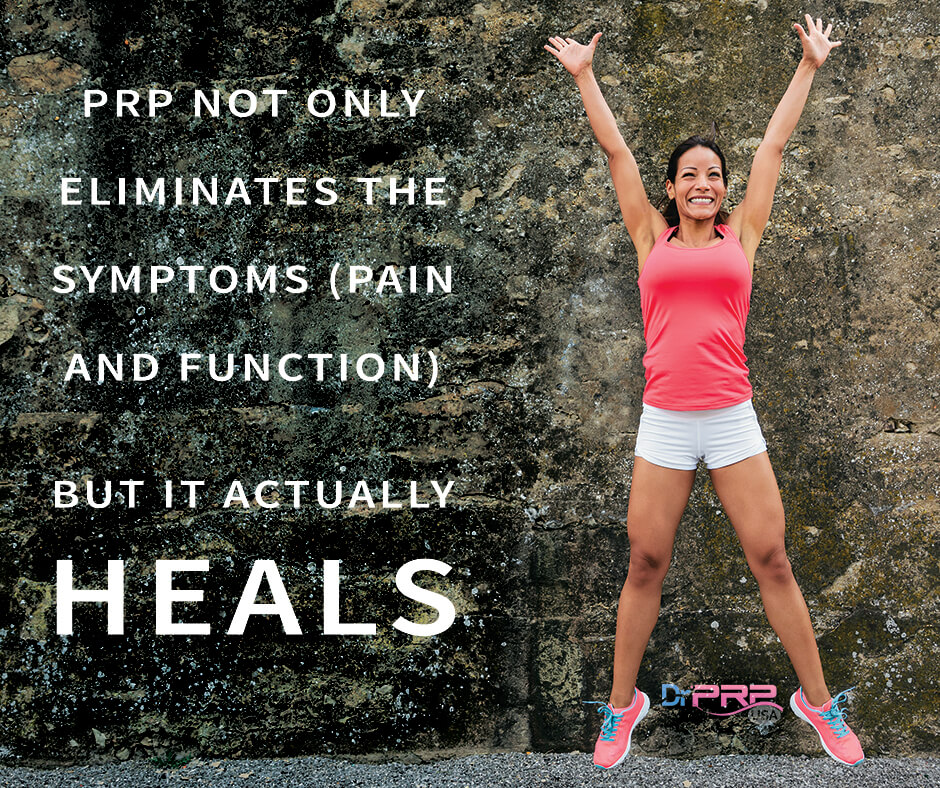 One of the early pioneers of Platelet-Rich Plasma, an orthopedic surgeon Dr. Allan Mishra, M.D., says, that soon this biologic tool would be “safe, simple to use, inexpensive, and available immediately at the point of care.”

And that requires a tipping point in its adoption by physicians. It’s already accelerating at a good pace.

Dr. Mishra goes on to say that, “chronic tendinopathy is the most common indication for applying PRP in my practice. I have used the treatment for tennis elbow, patellar tendinosis, partial Achilles tendon tears and occasionally partial rotator cuff tears as a stand-alone treatment. I also now routinely augment all of my Achilles and patellar tendon repairs with PRP. And I am considering augmenting my arthroscopic rotator cuff repairs as well with PRP. For nonunions or difficult fractures, I combine PRP with bone grafting.”

For the patients, Platelet-Rich Plasma has been helping them avoid surgery for years now. See the videos below for actual testimonials from real patients.

Here’s another patient’s story of how PRP helped avoid surgery.

“When I tore my rotator cuff in 2008, I had conventional laparoscopic surgery to repair it. The outcome was excellent, but the recovery was long and horrible. The orthopedist wouldn’t let me drive for six weeks, or run, swim or lift weights for three months. I suffered through weeks of torturous physical therapy. It was nearly six months before I felt normal again.”

And the patient vowed to never go through that ever again.

Unfortunately, the patient suffered another injury in 2014.

But this time decided to try Platelet-Rich Plasma instead.

The patient said, “I had the first PRP injection on Oct. 23. It was painful, and the aching persisted for about 36 hours. I had one bad night, followed by an uncomfortable day. After that, the pain stopped. Still, my doctor advised me to baby the shoulder — to use my other arm when holding a dog leash and to skip swimming and weights for two weeks. Running was fine. He also recommended physical therapy after two weeks.”

The patient reported that by February 2015, the shoulder was 80% healed. The doctor advised the patient to have a second PRP injection to heal the remaining 20%.

Here’s what the patient said:

“I had [the second injection] on March 4. When I returned to see [the doctor] on April 12, I was feeling pretty good. No pain, no problems. He rolled in the ultrasound machine, and I was not surprised by the results.”

Watch this second video for another excellent patient story.

Get Started On Platelet-Rich Plasma Now

The best way to start making a big difference in your patients, especially if you’re an orthopedic surgeon, rheumatologist or any kind of pain management specialist, is to get going with Platelet-Rich Plasma. Don’t just have it as a back up treatment that you can try when things don’t go well. Instead, it can be used as a standard first-line treatment for musculoskeletal issues.

Give it a serious consideration. 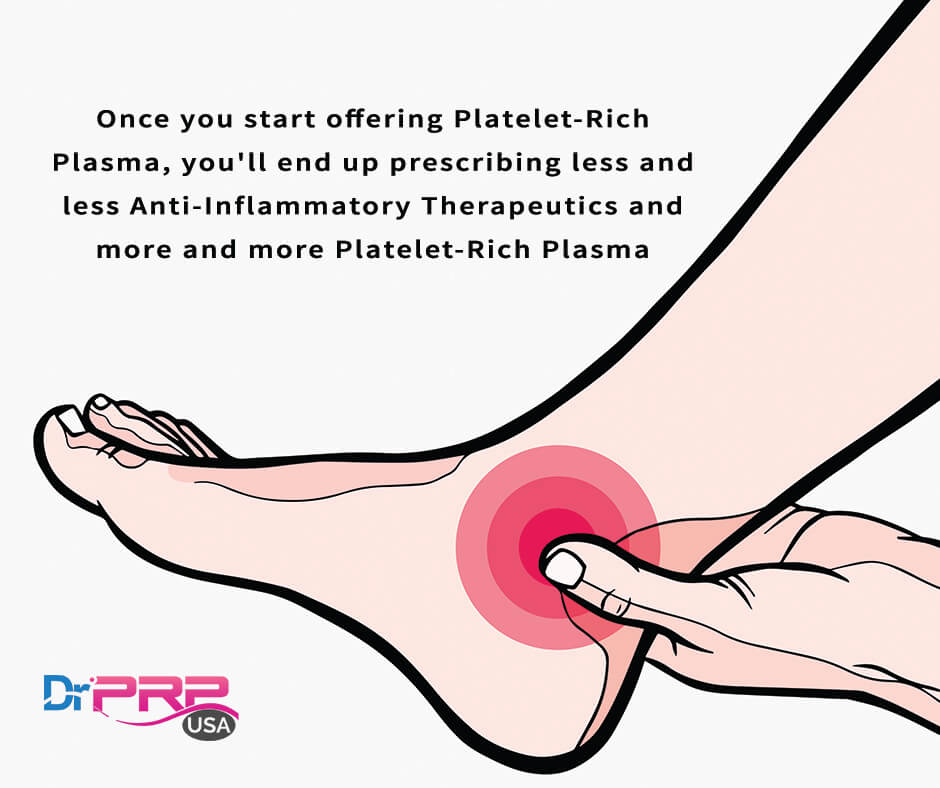 We can guarantee that once you start offering Platelet-Rich Plasma, you’ll end up prescribing less and less Anti-Inflammatory Therapeutics and more and more Platelet-Rich Plasma. And it will have a tremendous impact on the lives of your patients. We want to see a world where the “replacement surgeries” are a thing of the past.

And Platelet-Rich Plasma can make it happen.

Give us a call if you need more information. We can be reached at (844) 377-7787 or email via [email protected]. Or you can order a Platelet-Rich Plasma kit online and try it in your practice.

Together, let’s welcome the Anabolic Era of Medicine.