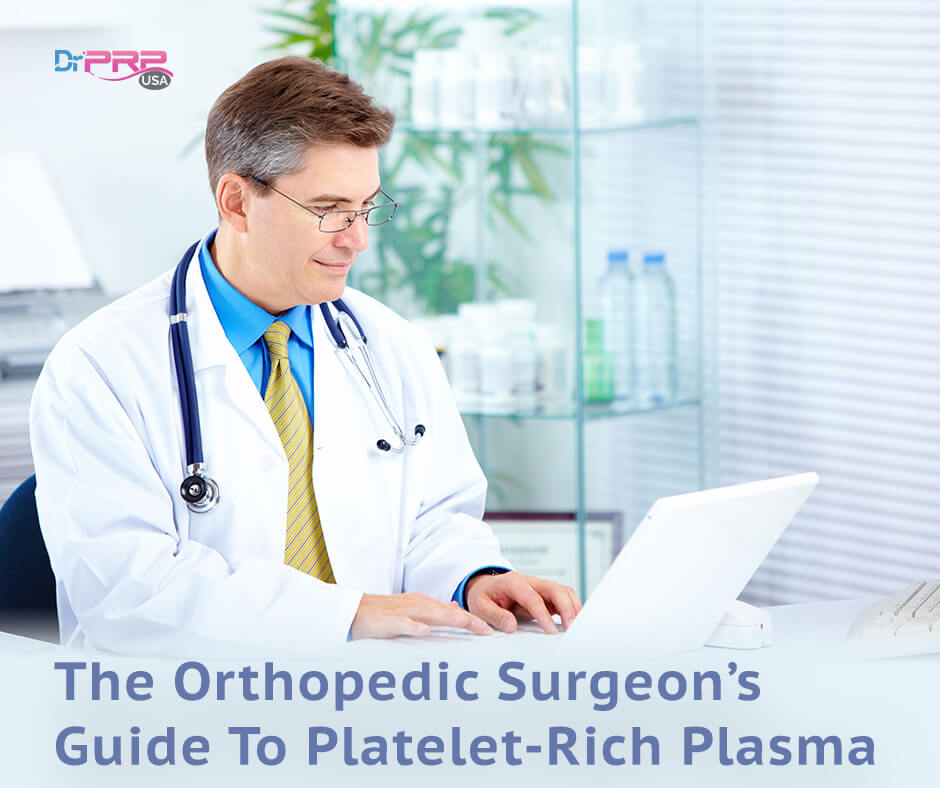 According to the famous sports medicine expert, Brian J. Cole, M.D., M.B.A., a good orthopedic surgeon is one who works hard to prevent his/her patients from going under the scalpel. To this end, he advocates a lot of contemporary thinking and treatments like Platelet-Rich Plasma rather than the usual MRI-driven surgical procedures. And we’re seeing more and more orthopedic surgeons who are following the cues of the people like Dr. Cole and are genuinely astounded by the sheer number of surgeries they could avoid by a little poking around with alternative treatments.

“The art of medicine consists of amusing the patient while nature cures the disease.”
~Voltaire 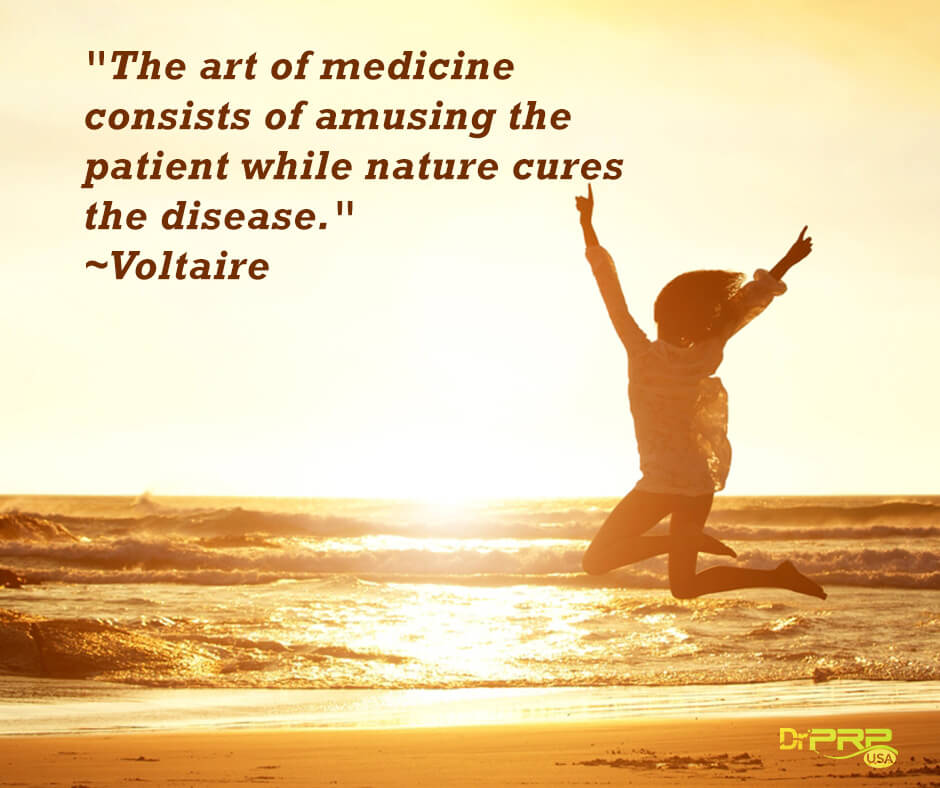 A Little Late to The Regenerative Game?

Generally speaking, orthopedic specialists have been hesitant in adopting regenerative therapies. They’ve been relying on visual technologies like MRI machines a tad bit too much and hence accustomed to “seeing” in order to believe it. But regenerative therapies like Platelet-Rich Plasma doesn’t work that way. One has to believe in it to see the results. You can’t half-heartedly try PRP injections and give up if it doesn’t work. In our opinion, that’s what separates a passionate orthopedic surgeon from a “just doing my job” orthopedic surgeon. The former has a lot of belief in the rather invisible but non-surgical options. As the saying goes, “All surgeons know how to operate, a good surgeon knows when to operate, but a great surgeon knows when not to operate.” 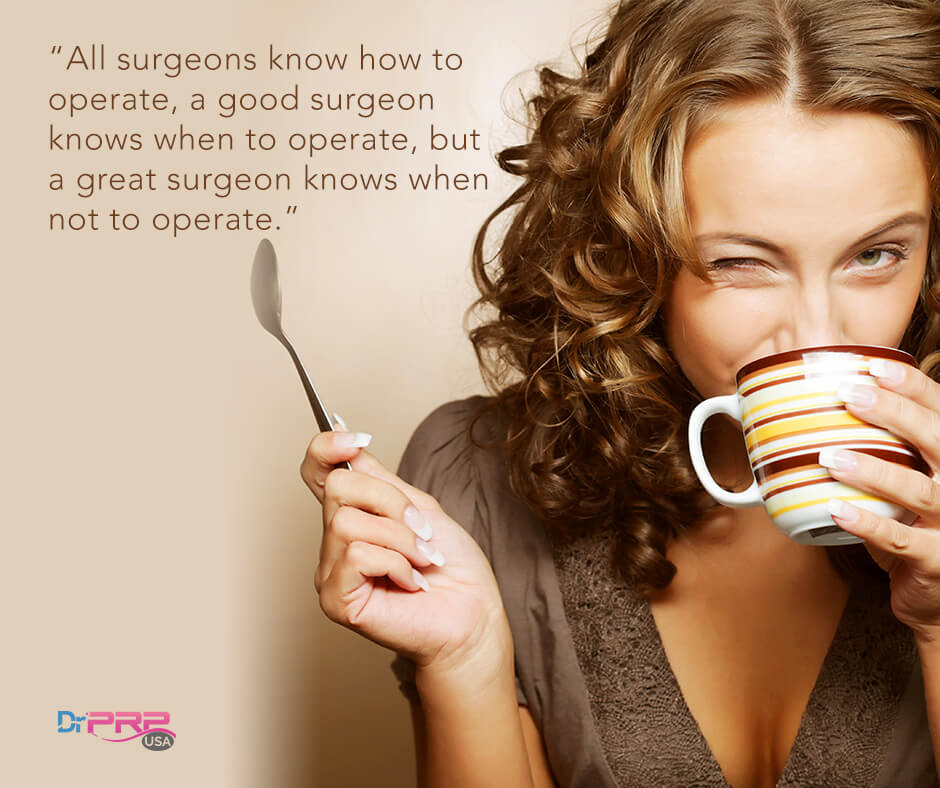 And no doubt, one of the key treatment options in Orthopedics that ends up actually saving a lot of patients from going under the knife (and has since become a powerful force in medicine) is Platelet-Rich Plasma. Of course, we’re biased but there is probably no other medical discovery in the modern medical history that has as much an impact on the medical industry as Platelet-Rich Plasma. Physicians now prescribe it as first-line treatment for a variety of medical conditions. And although Plastic surgeons are leading the way in pioneering its application, we believe the nature of PRP is such that it will eventually be of massive benefit in Orthopedics than any other field.

Another reason is runners. They constitute a good portion of the orthopedic surgeon’s patients. These patients do not have life-threateningly serious conditions. They might have minor pain or discomfort that prevents them from enjoying their daily run. They just want to be able to run again. The great news is, a single shot of Platelet-Rich Plasma can do wonders for them. 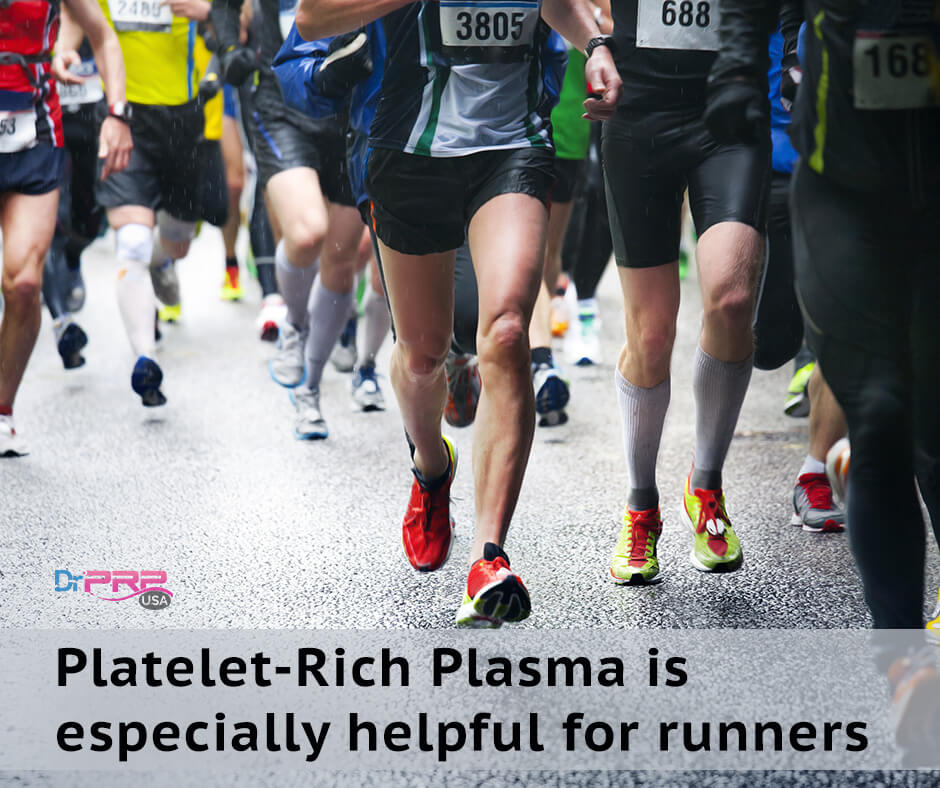 Although few physicians question the efficacy of Platelet-Rich Plasma for joint diseases like knee arthritis, there are well-meaning physicians who resist recommending it to their patients lest they end up wasting the patient’s money. We regularly receive enquiries from such physicians asking for “hard evidence” of PRP’s efficacy. We know that skepticism is natural. And that’s why we’re doing our best to educate physicians so they can come to their own conclusion about Platelet-Rich Plasma.

The truth is there has been more evidence than we can handle.

Let’s take a look at a few of them.

Platelet-Rich Plasma is huge in arthritis. Earlier this year, researchers from Shanghai, China published a review of the 14 existing randomized controlled trials related to PRP treatment of knee-OA that comprised a total of 1423 participants. And they concluded that Platelet-Rich Plasma could be more efficacious than HA, ozone, and corticosteroids in terms of pain relief and functional improvement at 3, 6 and 12 months follow-up. This justifies why some physicians are confident enough to use PRP injections as first-line treatments for all osteoarthritis cases. 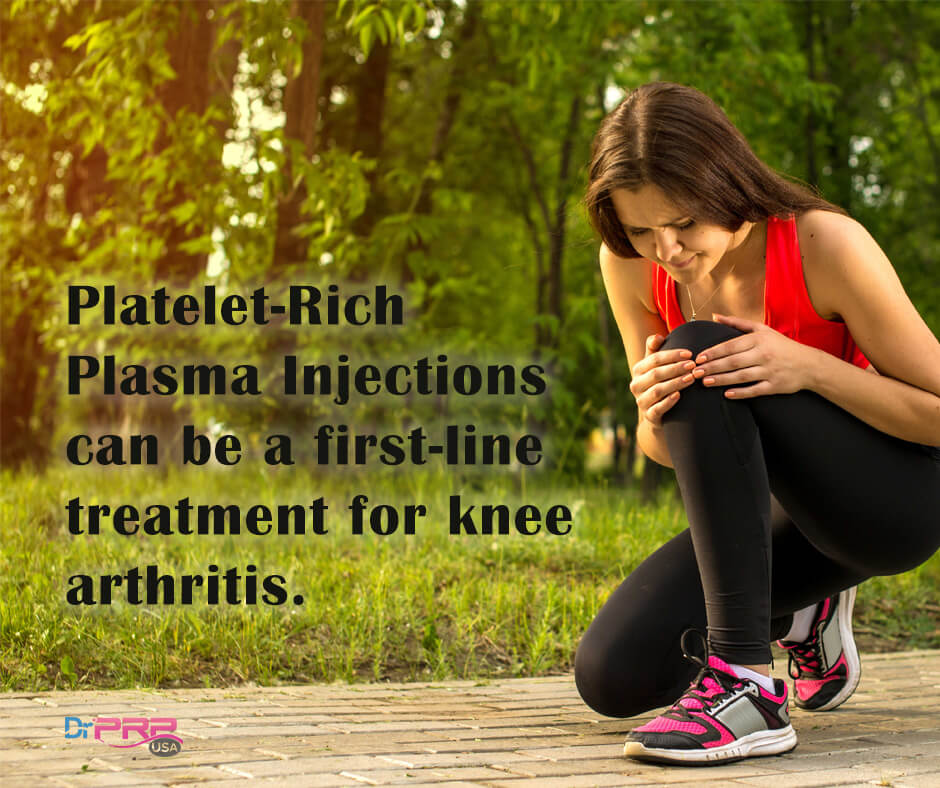 And just recently, Spanish researchers took the next step. They tested an advanced method of Platelet-Rich Plasma infiltration for treating severe hip osteoarthritis and found that the technique extended the distribution of PRP and improved its efficacy. Simultaneously, another Spanish study established that a single PRP injection can be effective in treating late-stage knee OA. This is really really great news. Because if you’re physician dealing with arthritis patients, you probably have never seen any treatment that is this simple which has long-term therapeutic effects like that.

However, on the standardization of the PRP treatment itself, there has been no major progress except that most of the research agrees that a concentration of 1,000,000 platelets per µl (or 5X-7X above baseline) is required for therapeutic effect. This can be obtained through buffy-coat based double-spin process similar to the one followed by Dr. PRP Kits.

Some researchers have suggested using Leukocyte-poor PRP for Osteoarthritis but there isn’t enough evidence to support the notion that having less leukocytes enhances OA treatment results. In fact, there are some RCTs like this that used leucocyte-poor PRP that have failed to produce significant results while leukocyte-rich PRP had a beneficial effect as evidenced by this study.

Bone regeneration is a little-known field of medicine where Platelet-Rich Plasma has been quietly performing well. In a 2014 study, researchers concluded that there is little doubt that PRP can be beneficial for bone regeneration. But the mechanism through which PRP was able to achieve this is still largely unknown. Recently, researchers in Japan has discovered that a combination of Bone Marrow Stem Cells and PRP appeared to enhance bone formation in mice. Another RCT by Iranian researchers suggested using PRP along with autologous bone graft for long bone non-union fractures.

Platelet-Rich Plasma has also been compared with bone marrow aspirate (BMAC) concentrate by Japanese researchers and they found that PRP has almost the same capability for bone regeneration as BMAC. This is significant considering the simplicity of PRP extraction vs BMAC extraction. 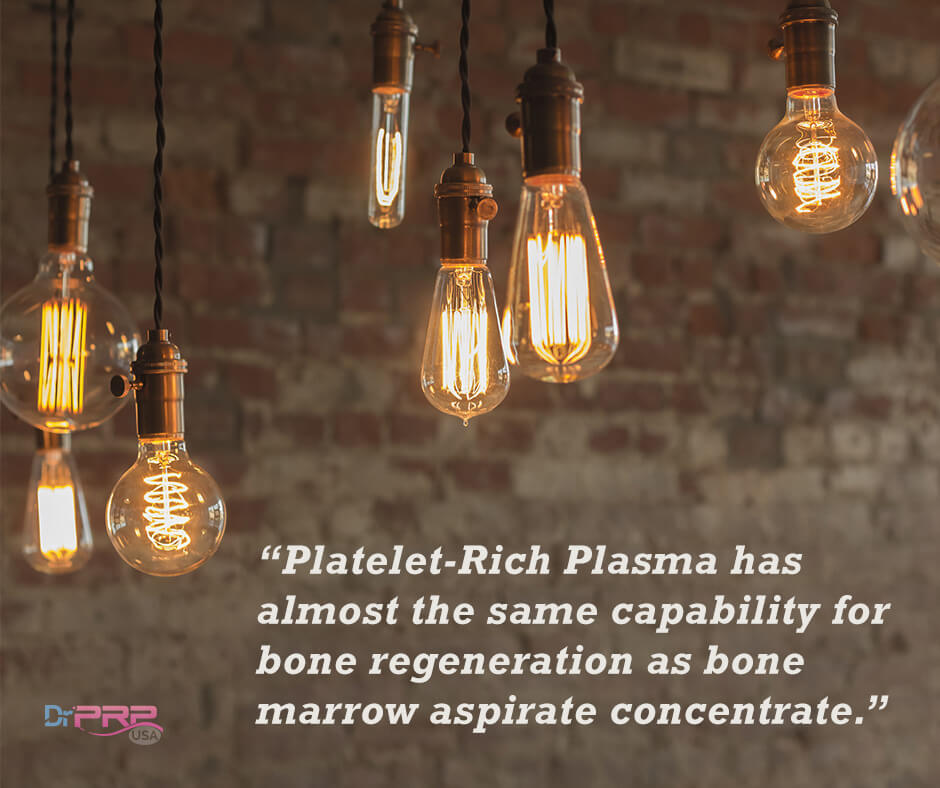 There is another meta-analysis by Korean researchers that looked at the effect of Platelet-Rich Plasma on Sinus Bone Graft. Again, the study concluded by saying PRP is beneficial.

Historically, tendons are known to respond well to Platelet-Rich Plasma. And this review of current literature confirms the fact. This review also concluded that Leukocyte-Rich PRP (the normal PRP) was more ideal for intratendinous injections.

But PRP’s relationship with Rotator cuff injuries suffered a setback last year when a Chinese review concluded that PRP is not beneficial. Prior to that, AAOS had reported that it might be beneficial.

Intervertebral disc degeneration is one of the leading causes of lower back pain and is usually the one of the most expensive conditions to be treated – mainly due to the complexity of the condition. In one case we know, a patient with degenerative disc condition in both his lumbar and cervical spine – he had both a degenerative bulging disc at L4 and a sacroiliac joint dysfunction – was still pain-free 2 years after his doctor administered 2 PRP injections. But for this post, let’s put anecdotes aside and look at latest studies like this by Chinese researchers which seems to support the notion that PRP is indeed beneficial for retarding intervertebral disc degeneration.

Another study by researchers in New York also found that PRP is beneficial in the treatment of degenerative intervertebral discs.

What we’ve presented here is only a fraction of the literature available. As you can see, this is an interesting time of development for Platelet-Rich Plasma. It continues to be of great interest to medical researchers and the patient population. Though the scientific community is torn apart by the lack of standardization and “hard evidence” for PRP treatments, patients are showing huge interest in it even though they have to pay out-of-pocket for these injections. And the reason why patients are voting with their wallets for this treatment is because 1) it’s simple and highly practical and 2) lot of anecdotal evidence. The research community is trying hard to catch up to these patients’ belief – there are currently over 100 active clinical trials on Platelet-Rich Plasma – and we believe it’s only a matter of time before they succeed in their quest. The lack of funding is only major hurdle the research community has to overcome before they uncover the full therapeutic effects of Platelet-Rich Plasma. And we’re excited and so should you because it’s great news for your patients. 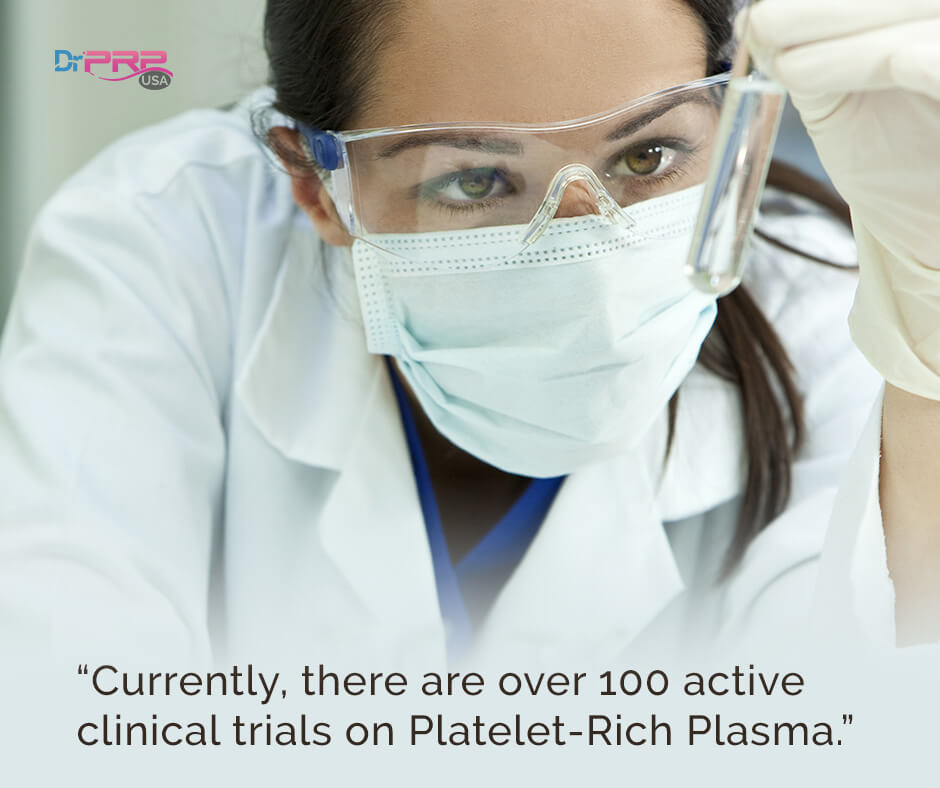 But for now, there’s plenty of evidence to suggest that Platelet-Rich Plasma treatments can be a standard regimen for treatment of musculoskeletal disorders. In the coming years, you will see more standardization in PRP preparation, concentration, pre-activation, injection volume, injection frequency and post-injection protocols.

The Cost Effectiveness of Platelet-Rich Plasma

One other thing to keep in mind, when weighing on the pros and cons of offering Platelet-Rich Plasma to your patients is the cost-effectiveness. Yes, you may not want to waste your patient’s money. But Platelet-Rich Plasma is something that has enormous upside with a relatively low downside. This is especially true when compared to surgical intervention. Average cost of the highly invasive arthroscopic debridement, for example, is $5000. But the same results may be obtained by 3 shots of PRP that costs $1000. The amount of improvement reported by patients undergoing both is similar – about 50%. That’s $20 for every percentage point improvement vs $100 for every percentage improvement in the case of arthroscopy. Even if the patients have to pay out-of-pocket for PRP injections, that’s not a good reason why they should not try Platelet-Rich Plasma. 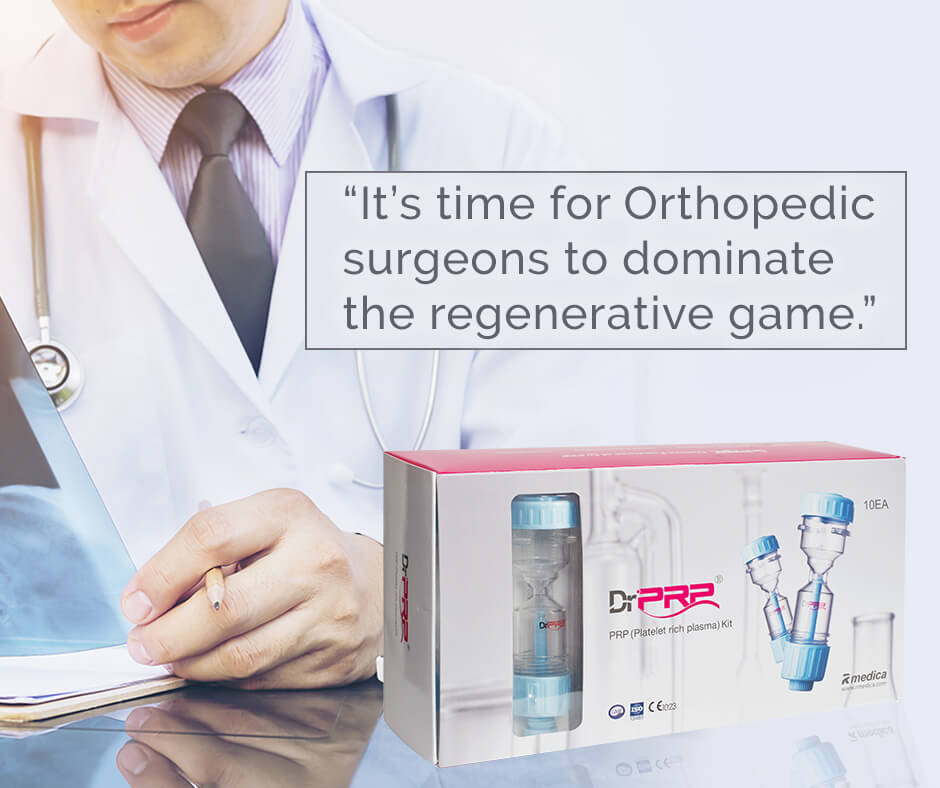